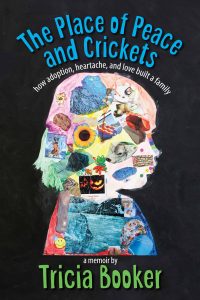 er and her husband had trouble conceiving, they followed the well-worn footsteps of couples exploring in-vitro fertilization. Two years and thousands of dollars later, they decided to have a long fulfilling life – without children. Instead, they became immersed in the world of international adoption. Their first child, born in Vietnam, introduced them to a poor but loving orphanage where infants slept with their caretakers.  Then came Guatemala, a beautiful, impoverished country where Booker’s two younger children lived in tiny cribs with little human interaction.

In candid, raw prose, Booker tells the story of her family, including her son’s diagnosis of Anxious-Attachment Disorder, the service dog she trained to help him, and her and her husband’s chaotic attempts to simplify their lives in order to heal their son.

“Startling and strong, sweet and sorrowful, this memoir will break your heart and make you laugh—often within the same sentence. This journey of love and healing traces one family’s unpredictable path of international adoption and parental fortitude …” ~ Diana Abu-Jaber, winner of the American Book Award and author of four novels and two memoirs, including Life Without a Recipe.

“Tricia Booker’s The Place of Peace and Crickets is a story about family and the bonds that form the core of our lives. Raised in New Orleans, she’s a red-headed, salty storyteller, and she tells the tale of how her international family came to be with verve and unflinching honestly.” – Neely Tucker, the Washington Post, author of the memoir Love in the Driest Season

“With honesty, humor, and an abundance of modern American zeitgeist, journalist Tricia Booker recounts her personal history with infertility, modern fertility miracles, international adoptions, grievous attachment disorders…. She tells the story of her family, and how they came to be, and how they survived being. In the process she tells an amazing story of heroism and defeat, closely intertwined.” ~ Janis Owens, author of American Ghost