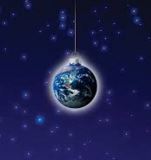 The idea of peace on earth may seem impossibly naïve at the moment, given the recent rise in extremism of every stripe and the violence that accompanies it.  Terrorism, both foreign and domestic, dominates the news, and the pundits tell us it’s working – that we are increasingly afraid of being attacked by some unknown “other.”  I still believe, though, that we can and will do better.

The frightening thing about the “other” is the “unknown” part. Recent surveys have shown that people who live in areas where Muslim populations are small or nonexistent are far more frightened of being attacked by extremists than are people who live near or work with Muslims. That’s because people who have Muslim friends and co-workers know from experience that violence is no more a part of their religion that it is of Christianity, Judaism, or any of the other world religions.

I think there really is a path to “Peace on Earth” and it starts with all of us getting to know each other. Yes, most of us get that we shouldn’t hate our fellow humans for the color of their skin or because they don’t worship the way we do. But how about the homeless guy who asks you for eighty-three cents because that’s how much more he needs to buy a sandwich at McDonalds – something that happened to me this week. Do we look at him with compassion or revulsion?  What about the alcoholic, the mentally ill, immigrants who are struggling with our language, the disabled, gays, lesbians and the transgendered, the working poor counting out their pennies in front of us at the checkout counter while we roll our eyes and look at our watches? Are we able to look past our differences, into our shared humanity? For me, as for most of us, I think, it’s a work in progress.

But I am working on it, because therein lies the hope for peace on earth. It a large part the reason I started Twisted Road: to find and share stories about people we imagine we won’t like but through the magic of good storytelling we discover that we do.

May your holidays be filled with peace, love, and joy.