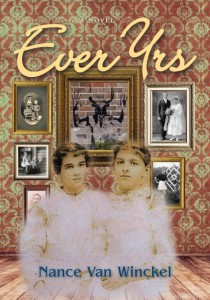 A 99-year-old great-grandmother tells the story of a family filled with quirks, foibles and downright strangeness through a series of photographs and family memorabilia.  The photographs are all captioned, some at great length, by the family matriarch.  They describe life in Butte, Montana, surrounded by the great copper mines of the early 20th century, and, later, by the environmental devastation left behind when the mines failed.

Here, in 1999, as the town awaits the Y2K meltdown and a “virgin birth” is apparently about to occur, Grandy hurries to divest herself of the secrets concerning both her good and bad contributions to Butte and her own descendants.

Nance Van Winckel teaches in the MFA Program at Vermont College of Fine Arts and is Professor Emerita in the MFA in Writing program at Eastern Washington University, where she served as editor of the literary journal Willow Springs from 1990-96. She was a poet in residence at the University of Montana and Westminster College. A thirteen-page excerpt from Ever Yrs was released in February by The Kenyon Review Online. She recently received a Christopher Isherwood Award for the book. She has published four collections of linked short stories, most recently by the University of Oklahoma Press. Her short stories have appeared in The Sun, Kenyon Review, AGNI, The Massachusetts Review, and other literary journals. Her second book of stories, Quake, received the Paterson Fiction Award. She has also published six collections of poetry.