Mother Nature has had enough and a day of reckoning is coming, foretold by words that mysteriously appear on the side of a shiny new building. When the reckoning arrives, in the form of a giant sinkhole that swallows the site of a planned development, a large lake, and several miles of interstate highway, the citizens of Opakulla, Florida struggle to understand what is happening. A geologist wants to study it, the developers relish its wild beauty, and the mayor plans to stop it. Only the owner of a local café, who speaks with the Ancients, understands it, and she isn’t telling. 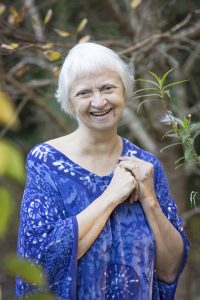 Elizabeth McCulloch was born in Buenos Aires, Argentina, and lived in New England, the Midwest, Canada, and the South, before putting down roots and finding her home in Gainesville, Florida, almost forty years ago. Previously a lawyer, then a teacher, she has had children of various stripes: one born, two foster, one step, and the granddaughter she is now raising with her husband. She has been writing fiction for thirty years, and her blog, The Feminist Grandma, for eight. This is her first published novel.