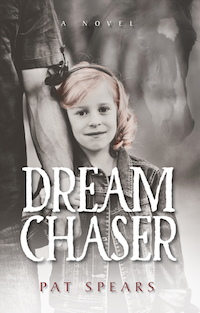 Jesse McKnight wakes one morning to find that his wife has left him, searching for “something better.” Her departure thrusts him into the role of single parent to their three children, who are skeptical of his clumsy attempts to bridge years of emotional absence. His artistic son, Cole, is ashamed of his father’s inability to affect a more promising future. Sky, the youngest, can only be consoled by her older sister, ten-year-old Katie, a tough realist who desperately wants to give her father a second chance. It’s Katie’s dream of owning a horse that leads Jesse to purchase, sight unseen from a brutal owner, a mustang mare. On the day the mustang is delivered, the terrified animal crashes through a hastily constructed corral and escapes into the nearby national forest, and Jesse vows to a broken-hearted Katie that he will find and return the mare. View book trailer.

One thought on “Dream Chaser”