We are proud and excited to announce our next “Coming Attraction,” due out in Spring 2015: Sewing Holes by Darlyn Finch Kuhn. 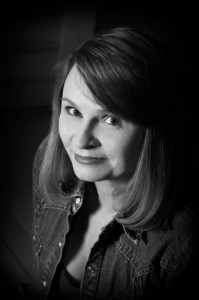 A poet known for her saucy style and engaging readings, Darlyn Finch Kuhn is also a gifted storyteller. Her work has appeared in literary journals, newspapers, and online. Her poems have been featured on Poetic Logic on WMFE-FM, and been read by Garrison Keillor on the Writers Almanac. She was interviewed on World Radio Paris. She has been a repeat winner of the Mt. Dora Festival of Art and Literature, Cultural Liaison for the Society of American Travel Writers Institute, and the eponymous “Scribbler,” of the Scribbles lit-newsletter.

Darlyn’s novel, Sewing Holes, tells the story a girl growing up in the 1960s and 70s in a family with a volatile mother, a loving but very ill father, a brother who flees the country to evade the draft, a foster sister whose life is consumed by waiting for her “real” parents to return, and a best friend who likes to beat her up.  She survives on stories and games she shares with father, particularly the one about “sewing holes” – creating beauty out of what seems to be nothing.