I love to cook – always have. One of the joys of being able to set my own schedule is that I can make time to keep up with old friends, make new friends, and cook food for every occasion that presents itself, even if it means editing until the wee hours of the morning and then putting a casserole in the oven  at dawn. I love potluck dinners. I might have called myself the Queen of Potlucks, but I have too many friends with a much stronger claim to the title. But I was, for a while, the Queen of Plastic Wrap.

Transporting food in glass containers works fine, but unless they have snap-on lids (and most of mine are nearly as old as I am, so they don’t), those glass tops just don’t do the job. They slide off. Plastic containers with plastic lids? I never had many of those, probably because the ones I did have kept going off to picnics and never coming home. So, it was pyrex bowls covered in plastic wrap for me!! Two layers, so nothing leaks!! 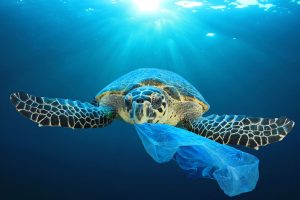 Plastic wrap is not reusable, not recyclable, and not biodegradable. This stuff is terrible, which slowly dawned on me as I watched the news feeds showing ginormous islands of plastic floating in our oceans. Fortunately, the other thing I  saw was savvy manufacturers starting to market alternatives. I began working toward eliminating as much plastic from my kitchen as I could.

I still don’t have those lovely new glass containers with snap-on lids – I would never be able to stuff them in the cabinets around my beloved pyrex. But now I have beeswax wraps (reusable and biodegradable) and still sometimes use aluminum foil (reusable and recyclable, aluminum being one of the most valuable things in the recycling stream). I have several sizes of silicone bags to replace plastic bags. 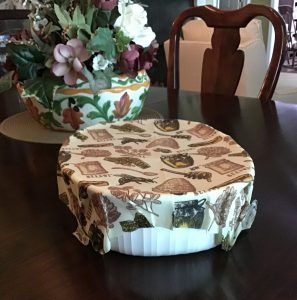 Recently, I bought some reusable straws that I can wave around in restaurants while telling the waiter/waitress “no straw please!” to head off the tossing of fistfuls of plastic onto our table anyway, because they seem to think I’m incapable of lifting a glass to my lips. (Do I really look THAT old?) And, over time,  I’ve developed strategies to remember to take my reusable grocery bags and mesh produce bags with me when I go shopping. One of the disappointments of this private little campaign of mine is the fact that, except for the aluminum foil and reusable grocery bags, I had to buy all of the plastic alternatives online. So, my current project is lobbying our local supermarkets to stock these things

When I started Twisted Road with the aim of giving voice to the marginalized, one of the things I realized – urged on by some really talented writers – is that some of the most marginalized creatures on the planet live in rivers and oceans. Hundreds of thousands of sea turtles, whales, and other marine mammals, and more than 1 million seabirds die each year from ocean pollution and ingestion or entanglement in marine debris. Meanwhile, we continue construct off-shore drilling rigs, and every day I hear people say “sure” when the bagger at the supermarket asks “Is plastic okay?”

I’ve published books and stories with environmental themes. I’ve published books and stories about people who can’t find jobs and the devastation that unemployment can inflict on families. The petroleum industry and the plastics manufacturers provide millions of jobs worldwide, but it’s also making a mess no one knows how to clean up. I don’t claim to know how we’ll find the balance between all the competing priorities, but I urge us all to work harder at finding it.

August 2019: Echoed in My Bones, a story of race, class, and family by Lisa Sturm

September 2019: Dreaming the Marsh, an environmental fable by Elizabeth McCulloch

When I first set out to write Acts of Assumption, back in 2014, I had no intention of producing something “timely.”  I had no plan to provide what one Haitian friend called “a much-needed, eye-opening and affectionate introduction to three ‘outsider’ cultures—Jewish, Latina and gay—that are so often misjudged in this country.”

My idea was simply to write a short story about a fervently-Orthodox little boy who finds himself dealing with a very odd affliction.

As things turned out, however, that little boy needed an older sister who could narrate and translate his story to a readership who might not be familiar with “sitting shiva” or ritual circumcisions or mincha ma-ariv prayer services.  And no sooner than that sister began taking shape, she began whispering: “I don’t fit in with my family.  I’m different. I’m gay. Tell my story.”  And then, of course, that sister needed a partner—and that partner turned out to be Latina.  And then, WHOOSH, the novel began taking off in all sorts of new directions—inspired and fueled by my lucky and beloved ties to all three of those “outsider” worlds.

And now, four years later—tragically—we have a white nationalist who opens fire on a Jewish synagogue because Jewish organizations dare to support refugees who are fleeing war and famine.  We have a powerful segment of the country shouting for a wall against Latinos and increasing attacks on LGBTQI individuals—and against anyone else deemed to be “other” in a nation that is actually largely comprised of “other.”

So, it seems I have written a “timely” novel.

That being the case—I offer the book up with the prayer that it will somehow, in some small way, advance the idea that in every culture (as in every family) there exists both beauty and strengths and difficulties and dysfunctions.  And that—therefore—it is our duty to try to learn from one another and bear with one another and support one another and try to find our way together.   ~ S. W. Leicher

Acts of Assumption will be released on November 30th. It is available for pre-order 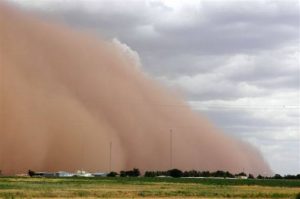 Most Americans have seen pictures of the dust bowl – dust storms brought on by the drought that devastated the great plains states during the 1930s. That particular drought ended, but the dust storms never did. Those of us who grew up on the plains have seen them up close and in person.

I’ve talked about my mother’s family, who ran the local newspaper, but my dad was a farmer and his cash crop was cotton. Farming on the plains has always been a perilous business. My parents used to shake their heads in continued disbelief when they would tell how two months before my sister and I were born – in October, harvest season – my dad’s entire cotton crop was wiped out in a hailstorm. Still, through hail, drought, market fluctuation, and yes, sandstorms, our farm and others like it survived. 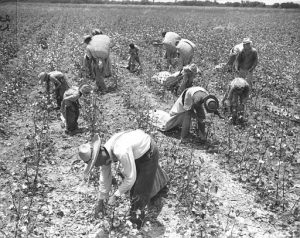 In the 1950s, when I was in elementary school, survival of small cotton farms was dependent upon the annual arrival of migrant farm workers. Machine harvesting of cotton wouldn’t become commonplace in our part of the plains until they early 1960s, so the seasonal workers – mostly from Mexico – were essential.

They would begin to arrive in mid-October. We were poor, but they were poorer. Living conditions for most of them were appalling. A few had the resources to rent small houses, but the rest lived in shacks with metal roofs that had been constructed across the road from the cotton gin. Those shacks were small and windowless and had to have been stifling when occupied by a family of six or eight. They may have had running water, but no proper kitchens or bathrooms. 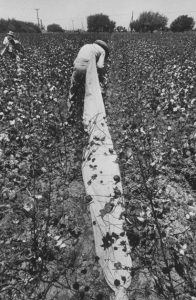 If schools hadn’t yet closed for the annual harvest break when the workers arrived, they would enroll their younger children in school. The kids would pick up as much English as they could, and would sometimes talk with us enough to teach us a few words of Spanish, but they did so reluctantly. Occasionally there would be kids who were sufficiently fluent in English they could have told us their stories – where they came from, what their homes in Mexico were like, where they’d been and what they’d seen – but none of them ever did. They kept to themselves, worked hard, and moved on.

They had moved around so much that most of the kids were a few grades behind. There would be six-, seven-, and eight-year-olds placed in first grade. The ones with the least grasp of English always looked a little stunned to be there; the ones with the most English were able to articulate their intelligence and eagerness to learn. Ten year-olds would frequently get placed in second or third grade, twelve-year-olds probably went to the fields. I used to wonder how they would ever catch up with their schooling. I didn’t want to believe they never would.

Did they have plans for the future beyond the next farm town, the next crop? I never asked. Part of me was just too shy, but I think I already knew there was a good chance it would make me very sad to know the answer.

Now I want to know.

I could declare that I survived poverty, drought, hail, and tornadoes, but I had a home and a community, and lived in a time and place where there was help for farmers who were struggling. The truth is, although we struggled, we always knew we would survive.

For marginalized individuals and groups – migrant farm workers whose work requires them to give up their homes and communities; victims of extreme weather events who have no safety nets;  those forced to flee their homes to escape war and violence;  those caught up in a criminal justice system that is anything but colorblind; and so many more – there are no such assurances. And yet many do survive. I want to hear and share those stories.